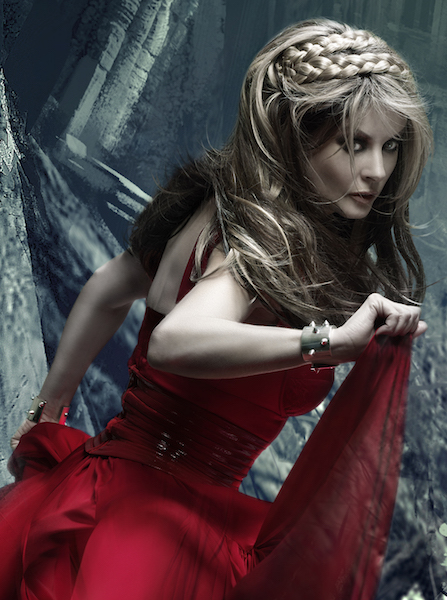 Brightman released a DVD collection of her music videos on October 3, 2006 under the title of Diva: The Video Collection. The Singles Collection is the accompanying CD, released on the same date. The album marked the first time Brightman had released a greatest hits album in the United States; it reached #1 on the Billboard Classical Crossover chart. Her other reflective offerings for Europe were The Very Best of 1990-2000 and Classics: The Best of Sarah Brightman.

During this time, subsequent appearances include the Concert for Diana in July 2007, where she sang “All I Ask of You” from The Phantom of the Opera with Josh Groban. Around 15 million people from across the UK watched Concert for Diana at home, and it was broadcast to over 500 million homes in 140 countries; On July 7, 2007 Brightman performed four songs (“Nessun Dorma”, “La Luna”, “Nella Fantasia” and “Time to Say Goodbye”) and debuted her single “Running” at the 2007 IAAF Championships in Osaka, Japan on 25 August.  She also participated at the 2007 Macy’s Thanksgiving Day Parade, where she performed “The Journey Home” on the Jolly Polly Pirate Ship.

On May 2007, Brightman was invited along with Lesley Garrett to sing ” Abide With Me” at the opening of the new Wembley Stadium in London before the FA Cup final between Chelsea and Manchester United.

At a dinner held at The Mansion House, on September 10, 2008, His Royal Highness the Prince of Wales highlighted the urgent need for action to halt tropical deforestation. The Prince invited Brightman to sing at the event they hosted to engage the financial community in the task of finding a solution to the problem of making rainforests worth more alive than dead. The music performed was “Nella Fantasia” (used in the soundtrack of the movie The Mission) and further declared a Hymn to the rainforests.

On January 29, 2008, Brightman released her first album in five years: Symphony, influenced by gothic music. In the United States, it became Brightman’s most successful chart entry and also her highest ranked album on Billboard’s “Top 200 Albums”. It was also a #1 album on two other Billboard’s charts: “Top Internet Albums” and “Top Classical Crossover Albums”. The album moved there 32,033 copies in first week, according to Nielsen Soundscan. The album was a Multi-Platinum and a top 5 release in China, Taiwan, Canada, Mexico, Japan, and Poland, and a top 20 across Europe.

Featured on the album were artists Andrea Bocelli, Fernando Lima, and KISS vocalist Paul Stanley, who duets with Brightman on “I Will Be with You”, the album version of the theme song to the 10th Pocket Monsters motion picture, Dialga VS Palkia VS Darkrai (Pokémon: The Rise of Darkrai). On January 16, 2008, she also appeared in concert at Vienna’s St. Stephan’s Cathedral, performing songs from her new album. Special guests who sang duets with Brightman include Italian tenor Alessandro Safina, Argentinean countertenor Fernando Lima, and British singer Chris Thompson.

She performed two songs, “Pie Jesu” and “There You’ll Be”, at the United States Memorial Day concert on May 25, 2008 held on the west lawn of the United States Capitol in Washington D.C.. The top-rated show was broadcast live on PBS before a concert audience of 300,000 and millions more at home, as well as to American troops serving around the world on the American Forces Radio and Television Network.

Brightman made her feature film debut as Blind Mag in the rock musical film Repo! The Genetic Opera which was released on November 7, 2008.  On August 8, 2008, Brightman was honored to sing the Olympic theme song, “You and Me”, with Chinese star Liu Huan in both Mandarin and English at the Beijing Olympics opening ceremony. The event appeased the already established supreme popularity and recognition of Brightman in the Asian country. The performance was broadcast to over five billion viewers. In the 26 hours after the performance, “You and Me” was downloaded 5.7 million times.

On November 4, 2008, Brightman released her first holiday album, entitled A Winter Symphony, the album debuted at number #38 on the Billboard Top 200 and scored a number six in the Top Holiday Albums, being the first entry for Brightman on this chart. To accompany Symphony and A Winter Symphony, Brightman embarked on a tour in Autumn 2008; “The Symphony World Tour” featured new and groundbreaking technology, with virtual and holographic stage sets that had never been seen before in any touring concert production.