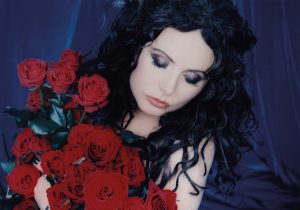 Next came the dreamy and supremely feminine album La Luna, laced with folklore and fantasy. For this album, Brightman chose songs drawing on influences as diverse as pop, vintage jazz, and high opera, in homage’s to Dvorak, Beethoven and Billie Holliday.   The imagery evoked by the music would translate beautifully to the concert stage and to another of Sarah’s visually groundbreaking world tours.  La Luna also reached #1 on the US Billboard Top Internet Albums and peaked at #17, with 900.000 US sales reaching Gold. In 2000 Brightman’s PBS La Luna concert, she sang “There for Me” in a duet with an up and coming star, Josh Groban. At the end of 2001, Billboard magazine noted Brightman as the most important classical crossover artist from the UK.

In 2001, Brightman released Classics, an anthology including highlights from three of Brightman’s chart-topping releases along with seven new tracks. In the US the album peaked at #66 on the Billboard’s 200 charts and promptly went Gold.  It reached #2 on Billboard’s Classical Crossover charts.

Her 2003 album Harem represented another departure: a Middle Eastern-themed album influenced by dance music. On Harem, Brightman collaborated with artists such as Ofra Haza and Iraqi singer Kazem al-Saher. Nigel Kennedy contributed violin tracks to the songs “Free” and “The War is Over”, and Jaz Coleman contributed arrangements.

The album peaked at #29 on the Billboard 200 charts, #1 on the Billboard Classical Crossover chart and #1 on the Swedish Album Chart and yielded a #1 dance/club single with the remix of the title track. The single “Free” from the album, co-written with Sophie B. Hawkins, became a second Top-10 hit on this chart. A year after of the album’s release, Harem was referred as a multi-million seller in EMI’s annual music sales report.

The albums Eden, La Luna and Harem were accompanied by live world tours which incorporated the theatricality of her stage origins. In both 2000 and 2001, Brightman was among the top 10 most popular British performers in the US, with concert sales grossing $7.2 million from 34 shows in 2000 and over $5 million from 21 shows in 2001. In 2004 the Harem tour grossed $60 million and sold 800,000 tickets.