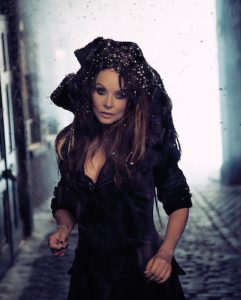 Back in the United States she appeared on America’s Got Talent’s on September 2010 finale episode before that season’s winner was revealed. The soprano was the celebrity guest duetting with ten year old contestant Jackie Evancho.

In parallel, October 1 & 2 2011, she made a special appearance during the finale of The Phantom of the Opera at The Albert Hall; a fully staged production performed at the famous London venue – marking 25 years since the musical received its world premiere. Introduced as his Angel of Music by Andrew Lloyd Webber, Brightman performed the title song backed by five past, present and future Phantoms. The production front of an audience of 5,500 was broadcast live into cinemas around the globe including in the U.S, around Europe, Canada, Japan and Australia. On October 26, 2013, Sarah made another guest appearance to commemorate the 25th Anniversary of The Phantom of the Opera on Broadway in New York City at the Majestic Theatre.

On September 26, 2012, Sarah released the first track “Angel” from her highly anticipated new album, “Dreamchaser” which was released worldwide in April 2013 and debuted at #1 on the Classical soundscan charts (Canada/US) and #5 (Canada) and #17 (US) on the Billboard Top 200. Brightman’s “Dreamchaser” World Tour, kicked off in China 2013 and touched upon 5 continents and included over 100 concert dates, throughout 2013/2014.

Sarah filmed her “Dreamchaser” In Concert PBS TV special at the legendary George Lucas Stage, Elstree Studios, in London, which aired in September 2013. DVD/Blu Ray of the concert was released in North America, Japan and China in the fall of 2013.

Throughout 2016, Sarah brought her “GALA – An Evening With Sarah Brightman” tour to Japan, China, Taiwan, South Korea and Mexico. Not only did Sarah perform many of her Greatest hits with orchestra but she also stepped from behind the microphone and embraced the role of conductor during these performances.

In late 2017, as part of the Royal Christmas Gala tour, Brightman entertained a 22-date tour across Europe. Sarah, together with Gregorian, Mario Frangoulis, Narcis, Fernando Varela and other special guests, performed a festive holiday show with orchestra, in theatres and arenas across the continent.

In February 2018, Sarah joined in on the incredible milestone celebration of the 30th Anniversary of Phantom of the Opera on Broadway, at the Majestic Theatre. Sarah surprised the sold-out audience with a performance of the title song, supported by phantom Peter Joback during the finale.

In Shanghai, China on June 7th, 2018, Sarah, together with Shanghai Media Group Live and Really Useful Group, announced that she would be joining a team of celebrity judges on the first ever-musical theatre casting TV show, which will be searching for first Chinese Phantom in 2020. The Chinese Phantom who is selected, will not only perform on stage in the Chinese production of The Phantom of the Opera, but also train and even possibly appear in London’s West End or the New York City Broadway production.

In recognition of her outstanding contribution to music and theatre, The University of Hertfordshire, the county in southern England where Sarah was raised, will present her with the degree of Honorary Doctor of Arts (Hon DArt) in September 2018. This honorary award will be conferred during the commencement at the Cathedral and Abbey Church of Saint Alban

Brightman returned to the recording studio in 2016, to begin working on her brand new album ‘HYMN’ with long time producer and collaborator Frank Peterson, which was released on November 9th, 2018 and debuted at #1 on the Classical and Classical crossover Billboard charts. In support of the release, Sarah is engaging in the most adventurous world tour of her career. The critically acclaimed HYMN World tour began in South America in September 2018 and will include over 125 shows, on 5 continents throughout 2020.

On November 15th, 2019, Sarah released her much anticipated “HYMN In Concert” film on DVD, Blu Ray, and Deluxe Special Editions (DVD/CD and Blu Ray/CD). “HYMN: Sarah Brightman In Concert” was captured from the Festspielhaus in the enchanted Bavarian Alps. Conceived and created by Sarah Brightman, Anthony Van Laast (“Mamma Mia”, “Beauty and the Beast”), and Frank Peterson, the two-act performance is a hybrid of a musical film and a large-scale concert production.