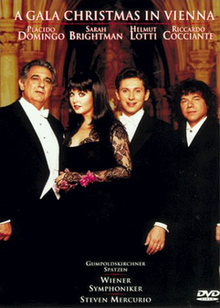 On December 21, 1997, Sarah Brightman, Helmut Lotti, and Riccardo Cocciante shared the stage of the Rathaus in Vienna, Austria with Placido Domingo for his annual Christmas in Vienna concert, which aired on live television in addition to being recorded for this video release. “Featuring carols and songs from all over the world…the singers join conductor Steven Mercurio and the Vienna Symphony Orchestra in renewing the charm of holiday favorites and sharing beautiful new songs that celebrate the season.” Running approximately 73 minutes long, the concert has several highlights for Sarah’s fans, including her solo of “The First of May” by The Bee Gees and the now traditional “Santa Claus is Coming to Town” during the medley part of the program.