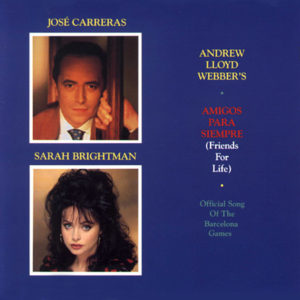 Sarah had been working for a year on a solo album (later to be named Dive) when she was invited to perform “Amigos Para Siempre,” the official song of the 1992 Olympic Games in Barcelona.

From the liner notes (written by Andrew Lloyd Webber) from the Surrender album about this song:

“This song was commissioned from me as the theme tune to the Olympic Games held in Barcelona in 1992 and performed live by Sarah Brightman and Jose Carreras at the closing ceremony, which was watched by a TV audience of 1.2 billion.”