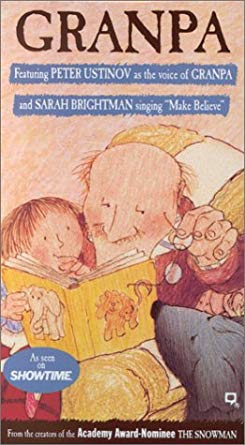 This thirty-minute animated video from the creators of the Academy Award nominated The Snowman was an adaptation of John Burningham’s award winning children’s book. It featured Sarah Brightman performing the song “Make Believe” and Peter Ustinov as the voice of Granpa. In addition to Sarah’s song over the end credits, Howard Blake composed an extensive musical score which was brought to life by forty children from the Wroughton Middle School choir and a forty-piece orchestra.

The liner notes state that in this story, “a very special relationship between Emily and her Granpa is lovingly explored. First aired on Showtime to rave reviews, Granpa’s extraordinary animation and rich orchestration lead us into a beautiful world as Emily’s imagination and love take her and Granpa through adventure after adventure. Few children’s videos explore meaningful life experiences – including Granpa’s departure – in such a sensitive, affirmative, and joyful way. It is the perfect program for children, parents, and grandparents to watch together.”