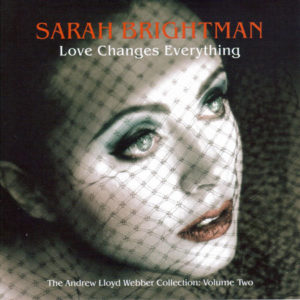 This collection of Andrew Lloyd Webber songs was released by Really Useful Records in 2005 and is notable for containing six previously unreleased tracks. “Probably on a Thursday” is Sarah’s version of a 1967 Andrew Lloyd Webber/Tim Rice single performed by Ross Hannaman, and is arguably the highlight of the album.

The disc also features Sarah’s recordings of “The Perfect Year” and “Too Much in Love to Care” from Sunset Boulevard, a previously unreleased version of “Love Changes Everything” and “Seeing is Believing” from Aspects of Love, and “Make Up My Heart” from Starlight Express.

1. Probably On A Thursday
2. The Perfect Year
3. Only You (featuring Cliff Richard)
4. Love Changes Everything
5. Seeing is Believing (featuring Michael Ball)
6. Think of Me (featuring Steve Barton)
7. Any Dream Will Do
8. I Don’t Know How to Love Him
9. Too Much in Love to Care (featuring John Barrowman)
10. The Phantom of the Opera (featuring Steve Harley)
11. Make Up My Heart
12. Don’t Cry For Me Argentina (Spanish Version)
13. Everything’s Alright
14. Whistle Down the Wind