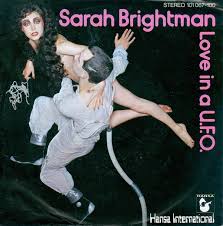 Another single, another group name. This time it’s “Sarah Brightman and the Aliens.” The public had an appetite for outer space and it simply made business sense to gratify them.

Sarah is minding her own business on “Love in A UFO”, when suddenly she sees “this blinding light, like an exploding star; and there it hovered right above my car.”

The alien proceeded to invite her onto his UFO, and unable to resist his beauty, she agreed to go. “Then at the speed of light, he made love to me through the night.”

Oh what a trip it was, so cosmically orgasmic.
I had no idea he was an android made of plastic (to a background chorus of “Plastic! Fantastic!”).

The B-side, “Illusions of Love,” is far more down-to-earth and especially notable because it is composed and produced by Sarah herself. A catchy song, about being stood-up and ignored by a boyfriend, with a chorus that goes:

Waiting around for the phone to ring.
Wondering just what the reason is.
Maybe he’s ill…or busy today.
Come on! You know he don’t work that way!

The 12” version of Love in a UFO has a second B-side entitled “Madam Hyde,” also produced by Sarah.

Madam Hyde is a twist on the Dr. Jekyll and Mr. Hyde story, but rather than turning into his evil alter ego, Dr. Jekyll turns into Madam Hyde instead.

It’s a poignant tale of a man turning into a woman, complete with background laboratory sounds, with a whiff of trans-gender angst. The lyrics tell us:

No more Dr. Jekyll. It’s Madam Hyde.
When I’m bored I need a change.
I drink my magic cocktail down.
The effect is very strange.
I look at life from both sides now.

They say a man is just a man,
But when a man becomes madam,
He cannot fail to be a star!

“Madam Hyde” also appeared on the soundtrack to the film The World is Full of Married Men.