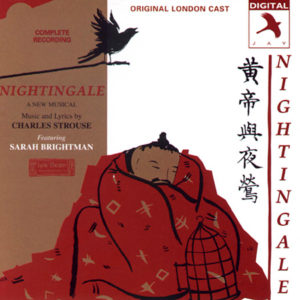 After her year-long stint with Cats, Sarah played the title role in Nightingale, a children’s opera written by Charles Strouse (who also wrote Bye Bye Birdie and Annie, amongst others).

It was Sarah’s luminous performance at the Lyric, Hammersmith that caused an awakening in Andrew Lloyd Webber, on both professional and personal fronts. The couple would be married two years later and go on to create musical theatre history with Phantom of the Opera.

The following is a synopsis of the opera, from the liner notes of the CD, written by Charles Strouse:

Once in China there was an Emperor so powerful and so protected that he was never able to be close to others, and was unaware of the world around him.

One day he heard of a Nightingale which lived in the forest and which sang so beautifully that all the peasants were charmed. He commanded a lovely young palace maid to bring the Nightingale to him.

The maid led the court to the forest where the Nightingale lived and she was captured. She became an immediate success in court and for a while she was the Emperor’s best friend and most prized possession.

But like today’s super stars, her popularity soon slipped, she became unhappy without her freedom. Finally she was replaced by technology (a mechanical bird) and escaped. Nobody, not even the Emperor, noticed that the Nightingale had flown away.

When the Emperor realized that the Nightingale was no longer by his side and that you can’t always possess what you love the most, he decided to cut himself off from the world with work. He became dejected and ill, and was finally confronted by death.

But the power of beauty (“The Nightingale’s Song”) and innocent love (of the palace maid) triumphed over death. The Emperor and the maid together with the Nightingale, lived happily ever after.

Him
Cats
Back to "Musical Theatre" BACK TO TOP