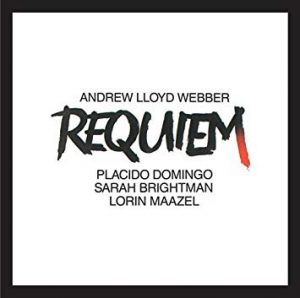 The first public performance of Andrew Lloyd Webber’s Requiem was recorded at St. Thomas’ Church in New York City on February 25, 1985. Placido Domingo (Tenor), Sarah Brightman (Soprano), and Paul Miles-Kingston (Treble) were supported with the combined choruses of Winchester Cathedral and St. Thomas’ Church together with the orchestra of St. Luke’s conducted by Lorin Maazel. In addition to the performance, there is footage of pre-performance preparation, and of Lloyd Webber taking his bow at this World Premiere. Requiem won a Grammy Award in 1986 for best classical composition, and Sarah Brightman was nominated for a Grammy Award as “best new classical artist.”

John Higgins writes in the liner notes of the “First Edition Concert Program” included with the first release of the video that “two events set the Requiem in motion. The first was the death of Andrew Lloyd Webber’s father in 1982 and the second was a story about Cambodia in an obscure corner of the New York Times, concerning a boy who was faced with the choice of killing his mutilated sister or being killed himself. Cambodia has no musical influence in the score, but it did give Lloyd Webber the idea of scoring the Requiem for a boy, a girl and a man: in other words, treble, high soprano and tenor. He toyed with including a bass, but soon rejected the concept … The presence of Placido Domingo as the tenor suggests that the Requiem will also be described as operatic.”

Lloyd Webber responds with “’Maybe. But as far as I’m concerned it’s the most austere piece I have written so far. What excites me is writing for the operatic voice, whether Placido’s or Sarah’s (Brightman), because you have almost another octave to play with, and all the attendant melodic possibilities.’”