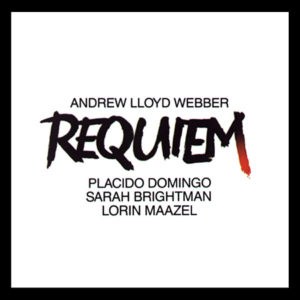 Singing alongside Placido Domingo, Sarah is accompanied by the Winchester Cathedral Choir and the English Chamber Orchestra, conducted by the famed maestro, Lorin Maazel.

The show was filmed by the BBC for its Omnibus program. In America, PBS aired it on their Great Performances series. Requiem was also subsequently performed at the Metropolitan Opera.

This was the first major production showcasing Sarah’s soprano voice, earning her the Grammy nomination for “Best New Classical Artist” of 1986.

Pie Jesu
Unexpected Song
Back to "Musical Theatre" BACK TO TOP