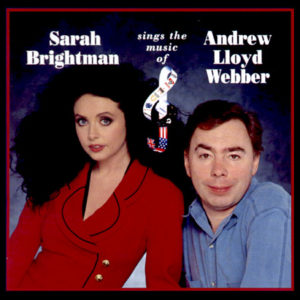 Although Sarah was starting to pursue her own solo career at this point, she was still performing in sporadic Andrew Lloyd Webber projects.

This CD was released in conjunction with Sarah’s worldwide tour of The Music of Andrew Lloyd Webber and contains most of the songs she performed on tour.

It is the only recording that contains “Another Suitcase in Another Hall,” “I Don’t Know How to Love Him,” “Any Dream Will Do” and her English version of “Don’t Cry for me Argentina” (which was recorded in Spanish on the Surrender CD).

From the liner notes by Andrew Lloyd Webber:

“This album contains all of my songs that Sarah Brightman premiered and many others which she performs in the concert The Music of Andrew Lloyd Webber.

Sarah was 19 when she played a kitten in my musical Cats. Even then I was struck by the huge range of her voice and a collaboration began between us that continues 12 years later.

Four of the songs that she premiered are included in their original hit versions; one song from The Phantom of the Opera, “Wishing You Were Somehow Here Again” is re-recorded. I believe it shows just how much she has developed in the last few years.

Sarah and I were married between 1984 and 1990, and during that time I wrote two musicals, Phantom, and Aspects of Love and my setting of the latin Requiem Mass.

She of course premiered Requiem and created the role of ‘Christine’ in Phantom. Subsequently she was acclaimed in both London and New York when she played ‘Rose’ in Aspects of Love, a role that I hope she will recreate on film.

It is perhaps easier to write what I feel about Sarah’s talent now that we are no longer married. I believe her voice is unique in its range and quality and that her sense of pitch is the truest I have ever worked with. Over that past decade she has developed into one of the most remarkable musical theatre performers I have heard and believe many of her interpretations of my music on this album will prove to be definitive.”