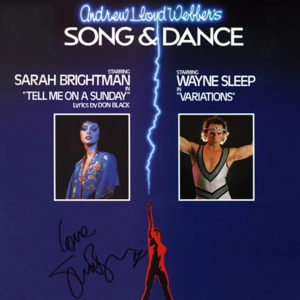 Sarah’s performance in Andrew Lloyd Webber’s musical Song and Dance was staged and recorded before a live audience at the Palace Theatre in London on April 28, 1984. This performance was commissioned by RCA as a video recording for release in the US.

The “Song” portion of Song and Dance was conceived originally as a one-woman musical entitled Tell Me On a Sunday, detailing the exploits of a British girl in New York.

This was eventually combined with high-octane dancing by Wayne Sleep, performed to a Lloyd Webber composition entitled “Variations” (based on Paganini’s Caprice in A minor).

Subsequently billed as Song and Dance, this full-length musical began a two-year run in 1982 at the Palace Theatre starring Marti Webb. It was at the end of the run that Sarah was commissioned to reprise the role in a live performance that was taped for video release.