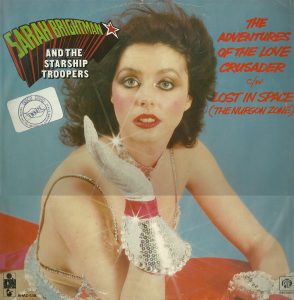 By the time her second single was released in 1979, Sarah had left Hot Gossip, and was able to remove the obligatory reference to the dance group. To capitalize on the success of “Starship Trooper”, she credited her album “Sarah Brightman and the Starship Troopers.”

For her follow-up to “Starship Trooper”, Sarah continues with an otherworldly theme. This time, she takes on Superman (although the name “Superman” is never mentioned, there are unmistakable references to “The Man of Steel,” “Kryptonite,” and “leaping tall buildings in a single bound”).

Sarah plays the Love Crusader who is “a lone love ranger come to set you on fire – and like a human torch – you’ll burn with desire!!”

It’s enough for the Man of Steel to declare, “Baby, I know I’m powerful but you’ve touched a nerve that makes me weak!”

The B-side, entitled “Lost in Space (The Nurgon Zone),” shares the touching story of womandroids who are banished to hyper-space exile in the Nurgon Zone. Sarah is heard lamenting, “Out of time, lost in space… I’m adrift in the galaxy.”

The song’s narrator (yes, the song had a narrator) announces:

By the year 2629, no less than 84% of all womandroids had been lost through accidental time warps and correction trips in the outer zone of Nurgon.

A pretty frightening statistic, whatever it may mean!

Collectable versions of this single include a four-page comic book by William Stok that includes song lyrics. This single was also released with different cover art in certain parts of the world.

1. The Adventures of the Love Crusader
2. Lost in Space (The Nurgon Zone)