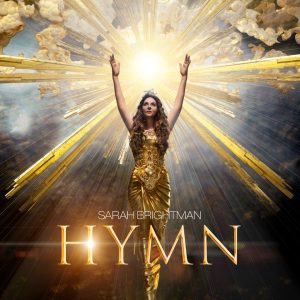 The pre-order for HYMN is now live HERE. The first track to be released from the album, “Sogni” can be heard HERE.

In addition to her new album, Sarah Brightman announced her world tour, Hymn: Sarah Brightman In Concert, which will begin in South America in November 2018 and include 125 shows across five continents throughout 2019.

The North American dates of the tour, produced by Live Nation, will kick off in January 2019 and tickets for the general public will go on sale beginning Friday, September 21 at 10:00am local time at HERE. Fanclub and forum community members can purchase tickets before the general public starting today at 2:00pm local time HERE. Citi is the official presale credit card for the Hymn: Sarah Brightman In Concert Tour. As such, Citi cardmembers will have access to purchase U.S. presale tickets beginning Tuesday, September 18th at 10:00am local time until Thursday, September 20th at 10:00pm local time through Citi’s Private Pass program. For complete presale details visit www.citiprivatepass.com. Every pair of online tickets for this show includes a physical CD of Sarah Brightman’s forthcoming album, HYMN. All albums must be redeemed by April 29, 2019.*

Mexico, Puerto Rico and South America dates have also been announced. See the announced tour routing below. Additional dates will be be announced in the coming months.

To enhance her world of enchantment, Sarah Brightman has partnered with Swarovski on her world tour. Her elaborate costumes and dazzling tiaras will be composed of Swarovski crystals. Fans will also have the opportunity to take home a sparkling memento through a variety of custom tour merchandise from Sarah’s signature product line designed and embellished with crystals from Swarovski. More information to be revealed in the coming months on this exciting partnership.

“I’m so excited to share this album with everyone. HYMN is excitingly eclectic, encompassing many different styles, and I’m looking forward to performing the new songs on my world tour. Every project I’ve done has come from an emotional place, and I wanted to make something that sounded very beautiful and uplifting.  To me, ‘hymn,’ suggests joy — a feeling of hope and light, something that is familiar and secure, and I hope that sentiment resonates through the music,” said Sarah Brightman.

Brightman returned to the recording studio in 2016 to begin working on HYMN with long time producer and collaborator Frank Peterson who notably helmed production on eight seminal recordings by the artist, including Dive [1993], Fly [1995], Timeless (Time To Say Goodbye) [1997], Eden [1998], La Luna [2000], Harem [2003], and Symphony and Winter Symphony [2008]. The spiritually themed HYMN is an inspirational collection of orchestrated, choir-based songs that Brightman says felt soothing to record at this moment in her life. The album was recorded over the past two years in Hamburg, Miami, London, Vancouver, Los Angeles, New York, and Budapest.

HYMN’s mystical, uplifting tone is set with its title track — a song by British prog-rock band Barclay James Harvest. The release also encompasses songs by such modern composers as Eric Whitacre (“Fly To Paradise”), Japanese superstar musician and songwriter Yoshiki (“Miracle”), and German DJ Paul Kalkbrenner (“Sky and Sand”). The album closes with a new rendition of Brightman’s signature smash duet with Andrea Bocelli, “Time To Say Goodbye,” singing lyrics that she wrote herself, and sung in English for the first time. Check out the full tracklisting below.

Additional tour dates to be announced in the coming months.

*The ticket CD bundle offer includes all North American dates with the exception of Atlantic City.

Known for her three-octave range and for pioneering the classical-crossover music movement, Sarah Brightman has amassed global sales of more than 30 million units. The only artist to have simultaneously topped Billboard’s dance and classical music charts, Brightman has racked up more than 180 gold and platinum awards in over 40 countries. She is also known for her iconic star turn in The Phantom of the Opera, whose soundtrack has sold more than 40 million copies worldwide. Her duet with Bocelli, “Time To Say Goodbye,” became an international success selling 12 million copies worldwide. Brightman’s albums Eden, La Luna, Harem, and Symphony were each chart-topping Billboard hits and accompanied by world tours. Additionally, Brightman has performed at such prestigious events as the 2007 Concert for Diana, the 1992 Barcelona Olympic Games and the 2008 Beijing Olympic Games.

Swarovski has been the premium brand for fine crystal embellishments since 1895. It is recognized for its innovative excellence and for its collaborations with world-class designers and brands from the fashion, jewelry, accessories, interiors and lighting industries. Available in myriad colors, effects, shapes and sizes, crystals from Swarovski offer designers an unrivaled palette of inspiration born out of a passion for detail and high-precision cutting. These precious ingredients impart a refined glamour to everything they embellish and are produced according to the groundbreaking lead-free* Advanced Crystal standard. The ‘Crystals from Swarovski’ seal, incorporating a sophisticated tracking system with a unique identification number to reinforce authenticity, enables customers to distinguish products embellished with genuine Swarovski crystals. www.swarovski.com/professional

*Crystal glass and all other materials containing 0.009% lead or less.