Sarah’s new album HYMN is Available Now! We continue to reflect back on her extraordinary career and celebrate some incredible highlights from the 2010s to the present.

In November 2010, Sarah was invited to perform at the Todai-ji Buddhist temple complex in the city of Nara, Japan, which is a listed UNESCO World Heritage Site. Early in 2012, Sarah also received the UNESCO Artist for Peace Award.

‘Dreamchaser,’ was released in 2013 and became her seventh no. 1 album in the Billboard Top Classical Albums chart. During this same year, Sarah embarked upon her Dreamchaser World Tour and filmed a new PBS TV special – ‘Sarah Brightman: Dreamchaser In Concert.’

Sarah released ‘Gala – The Collection’ exclusively in Japan in 2016 and joined the Royal Christmas Gala conert tour in 2017, which included 23 dates across Europe.

In September, 2018, Sarah announced her fifteenth full-length album HYMN, which was released on November 9. HYMN will be supported by ‘HYMN: Sarah Brightman In Concert’ world tour, which will begin in South America this month. The journey continues … 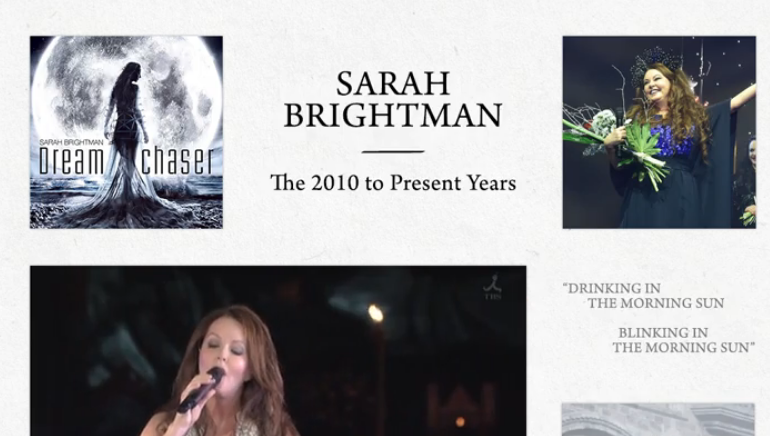