Sarah’s Behind-the-Music Spotify Mobile Scavenger Hunt: Congratulations to the Week 1 hunt winner, Ginny Keast, who found Sarah’s song “Sky and Sand.” Ginny is this week’s Fan of the Week and is now entered into a contest to win one of three “Ultimate Fan Grand Prize Packages” featuring beautiful collectors’ items from Sarah’s store and collectible memorabilia.

Stay tuned every Wednesday for the next 9 weeks for clues and trivia questions about Sarah’s songs throughout her incredible five-decade long-career for more chances to win!

This week’s Scavenger Hunt Clue and Question: This song was released as the second single from Sarah’s 2008 ‘Symphony’ album and features an excerpt from a movement from Holst’s orchestral suite ‘The Planets.” Which planet was this movement named after?

Follow the clue to the song on Spotify… open up the “Now Playing” screen to find the answer to the question, hidden within the special video clip. Post the correct answer HERE. 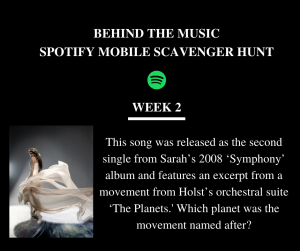